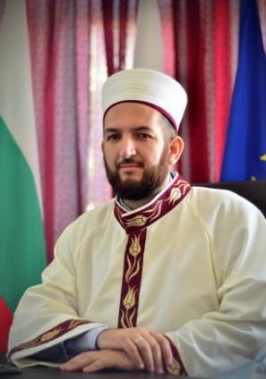 Vedat S. Ahmed was born on 8 January 1979 in the town of Kaolinovo, Kus quarter, Shumen region.

In 1997 he graduated from the General Secondary Religious School “Nyuvvab”- Shumen.

In 2011 he graduated from the Higher Islamic Institute – Sofia.

From November 2004 to May 2006 he occupied the post of Head of the Department of Education at Grand Mufti’s Office.

In 2004-2005 he was a guest lecturer in Ottoman-Turkish language at the Higher Islamic Institute - Sofia.

In 2008, 2009 and 2011 he was elected as a member of the Supreme Muslim Council. As a member in the Council he participated in several standing committees. From 2011 to 2016 he was a Chairman of the Sharia Court.

From May 2005 to 27 July 2016 he was a Deputy Grand Mufti, and he was re-elected for the same post in 2008, 2009 and 2011. Meanwhile he was elected by the Supreme Muslim Council to represent the Grand Mufti when he is absent. As a Deputy Grand Mufti he was in charge of “Religious activities” (irshad), “Education”, “Publishing” and “Hajj and Umrah”.

At the regular National Muslim Conference, held on 24 January 2016 he was elected as a Chairman of the Supreme Muslim Council. Along with this he is directly responsible for the activity of “Publishing” Department of Grand Mufti’s Office.

He delivered reports at international forums and published dozens of articles on religious, historical, cultural and literary topics mainly in Bulgarian and Turkish editions, as well as several scientific researches dealing with the issues of the Muslim education and culture in Bulgaria. Several books which he translated are published.

He is married and has four children – two boys and two girls.